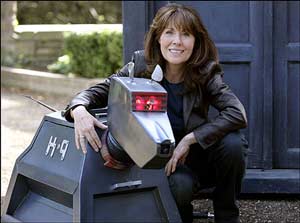 The Doctor Caring Matriarchy of -Sarah Jane Smith- is a gargantuan, environmentally stunning nation, remarkable for its compulsory military service. The hard-nosed, hard-working, cynical population of 21.682 billion Smiths are ruled by a mostly-benevolent dictator, who grants the populace the freedom to live their own lives but watches carefully for anyone to slip up.

The large government juggles the competing demands of Defense, Law & Order, and Environment. The average income tax rate is 36.2%.

The Sarah Jane Smith economy, worth 800 trillion Pounds a year, is quite specialized and led by the Cheese Exports industry, with major contributions from Book Publishing, Woodchip Exports, and Arms Manufacturing. Average income is 36,904 Pounds, and evenly distributed, with the richest citizens earning only 3.6 times as much as the poorest.

Crime is moderate. -Sarah Jane Smith-'s national animal is the K-9, which frolics freely in the nation's many lush forests.

-Sarah Jane Smith- is ranked 45,273rd in the world and 4th in The Doctor Who Universe for Best Weather, with 118 Meters Of Sunlight.