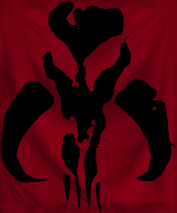 The Nuhaatyc Republic of Arutiise is a gargantuan, orderly nation, ruled by Mand'alor with an iron fist, and remarkable for its ban on automobiles, strictly enforced bedtime, and free-roaming dinosaurs. The hard-nosed, cynical, humorless population of 21.798 billion Mando'ade are ruled with an iron fist by the dictatorship government, which ensures that no-one outside the party gets too rich. In their personal lives, however, citizens are relatively unoppressed; it remains to be seen whether this is because the government genuinely cares about its people, or if it hasn't gotten around to stamping out civil rights yet.

The large, corrupt, well-organized government juggles the competing demands of Defense, Education, and Healthcare. It meets to discuss matters of state in the capital city of Keldabe. The income tax rate is 100%.

The frighteningly efficient Mando'adyc economy, worth an astonishing 14,585 trillion ÅⱯÅpaks a year, is driven entirely by a combination of government and state-owned industry, with private enterprise illegal. However, for those in the know, there is an enormous, deeply entrenched, broadly diversified black market in Information Technology, Arms Manufacturing, Book Publishing, and Basket Weaving. The private sector mostly consists of enterprising ten-year-olds selling lemonade on the sidewalk, but the government is looking at stamping this out. Average income is a breathtaking 669,117 ÅⱯÅpaks, and distributed extremely evenly, with practically no difference between the richest and poorest citizens.

Intellectual snobbery has the cognoscenti sneering at anyone who doesn't have an opinion on the semiological drift of Umberto Eco's works, secret police deal with secret crimes, notable individuals are granted land and titles, and the true length of the coastline of Arutiise may never be measured. Crime, especially youth-related, is totally unknown, thanks to a capable police force and progressive social policies in education and welfare. Arutiise's national animal is the Nuhaatyc, which is also the nation's favorite main course, and its national religion is Dar'manda.

Arutiise is ranked 1,150th in the world and 1st in The Atheist Empire for Most Beautiful Environments, with 4,145.53 Pounds Of Wildlife Per Square Mile.

Most Recent Government Activity: 30 minutes ago