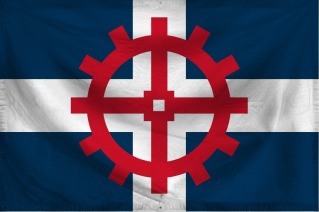 The Republic of Baeria is a massive, environmentally stunning nation, notable for its zero percent divorce rate, ubiquitous missile silos, and keen interest in outer space. The compassionate, democratic, devout population of 3.298 billion Baerians are known throughout the region for their efficiency and work ethic, as well as their general suspicion of leisure.

The medium-sized, outspoken government juggles the competing demands of Education, Administration, and Healthcare. The average income tax rate is 33.0%, but much higher for the wealthy.

The all-consuming Baerian economy, worth 427 trillion dollars a year, is broadly diversified and led by the Information Technology industry, with major contributions from Tourism, Arms Manufacturing, and Beef-Based Agriculture. Average income is an impressive 129,612 dollars, and evenly distributed, with the richest citizens earning only 2.4 times as much as the poorest.

Tech-mad citizens think that the laser-powered bread-slicer uPhone App is the coolest thing since sliced bread, politicians spend more time in courtrooms than in Parliament, in life full of care there is no time to stop and stare, and the nation's politicians are known more for the internet memes they spawn than any of their accomplishments. Crime, especially youth-related, is totally unknown, thanks to a capable police force and progressive social policies in education and welfare. Baeria's national animal is the falcon, which soars majestically through the nation's famously clear skies.

Baeria is ranked 42,004th in the world and 45th in The Western Isles for Rudest Citizens, with 74.62 Insults Per Minute.