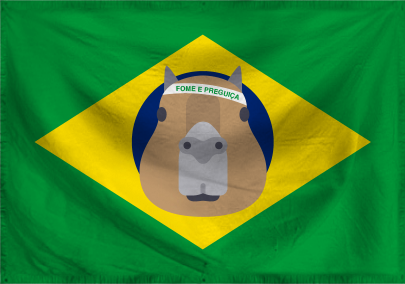 The Armed Republic of CapivaraLand is a huge, orderly nation, ruled by Capybara with an iron fist, and renowned for its anti-smoking policies, prohibition of alcohol, and strictly enforced bedtime. The hard-nosed, cynical population of 997 million Capibaryans are ruled without fear or favor by a psychotic dictator, who outlaws just about everything and refers to the populace as "my little playthings."

The enormous, corrupt, moralistic, well-organized government juggles the competing demands of Law & Order, Administration, and Defense. It meets to discuss matters of state in the capital city of Capybary. The average income tax rate is 81.9%, and even higher for the wealthy.

The thriving CapivaraLandian economy, worth 96.2 trillion Centavos a year, is driven entirely by a combination of government and state-owned industry, with private enterprise illegal. The industrial sector, which is quite specialized, is dominated by the Arms Manufacturing industry, with significant contributions from Information Technology, Beef-Based Agriculture, and Tourism. Average income is 96,500 Centavos, and evenly distributed, with the richest citizens earning only 2.2 times as much as the poorest.

Angst-filled teenagers are rushing off to buy government bonds for some odd reason, cricket farmers use magnifying glasses to fit every member of their herd with tiny tracking tags, women complaining about lack of opportunity are told to "man up", and the nation is under martial law. Crime, especially youth-related, is totally unknown, thanks to the all-pervasive police force and progressive social policies in education and welfare. CapivaraLand's national animal is the Capybara, which is also the nation's favorite main course.

CapivaraLand is ranked 22,828th in the world and 531st in the Rejected Realms for Largest Manufacturing Sector, scoring 19,572.25 on the Gooback-Jerbs Productivity Index.