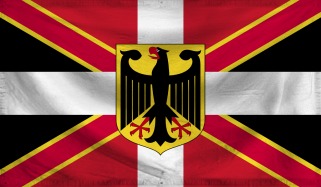 The Unitary State of Condonohia is a colossal, efficient nation, ruled by Comrade Bronzan with an iron fist, and remarkable for its closed borders, punitive income tax rates, and stringent health and safety legislation. The hard-nosed, cynical, humorless population of 5.427 billion Condonohians are ruled without fear or favor by a psychotic dictator, who outlaws just about everything and refers to the populace as "my little playthings."

The enormous, corrupt, moralistic, socially-minded, well-organized government prioritizes Defense, with Law & Order, Education, and Environment also on the agenda. It meets to discuss matters of state in the capital city of Bronzangrad. The average income tax rate is 93.8%, and even higher for the wealthy.

The thriving Condonohian economy, worth 627 trillion Condons a year, is driven entirely by a combination of government and state-owned industry, with private enterprise illegal. However, for those in the know, there is a slick, highly efficient, highly specialized black market in Arms Manufacturing, Trout Farming, and Information Technology. The private sector mostly consists of enterprising ten-year-olds selling lemonade on the sidewalk, but the government is looking at stamping this out. Average income is an impressive 115,642 Condons, and distributed extremely evenly, with practically no difference between the richest and poorest citizens.

The nation has always been at war with Bigtopia, parties that are too noisy are broken up to prevent disturbing wildlife, foreign nations often blame poverty and terrorism on Condonohian selfishness, and citizens are frequently searched for illegal weapons. Crime, especially youth-related, is totally unknown, thanks to the all-pervasive police force and progressive social policies in education and welfare. Condonohia's national animal is the Prole, which frolics freely in the nation's many lush forests, and its national religion is Bronzanity.

Most Recent Government Activity: 117 minutes ago