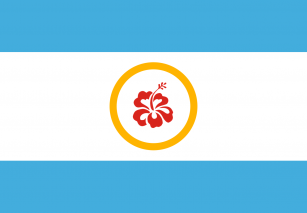 The Federation of Costa Hermosa is a massive, genial nation, ruled by El Presidente with a fair hand, and renowned for its museums and concert halls, multi-spousal wedding ceremonies, and keen interest in outer space. The compassionate, democratic, cheerful population of 2.57 billion Costa Hermosans enjoy a sensible mix of personal and economic freedoms, while the political process is open and the people's right to vote held sacrosanct.

The large, outspoken government juggles the competing demands of Education, Industry, and Administration. It meets to discuss matters of state in the capital city of Mérida. The average income tax rate is 92.6%, and even higher for the wealthy.

The frighteningly efficient Costa Hermosan economy, worth 433 trillion Ameroes a year, is led by the Information Technology industry, with significant contributions from Tourism, Book Publishing, and Retail. State-owned companies are common. Average income is an impressive 168,791 Ameroes, and distributed extremely evenly, with little difference between the richest and poorest citizens.

Airport announcements inform passengers that flights have been delayed because pilots are having afternoon naps, open-casket funerals are avoided at all cost, government buildings are being cleansed of anything that might have racist connotations, and political detractors refer to El Presidente as 'that Bigtopian puppet'. Crime is totally unknown, thanks to a capable police force and progressive social policies in education and welfare. Costa Hermosa's national animal is the jaguar, which frolics freely in the nation's many lush forests, and its national religion is Roman Catholicism.

Costa Hermosa is ranked 121,914th in the world and 1st in United Community of Nations for Largest Insurance Industry, scoring 234.13 on the Risk Expulsion Effectiveness Rating.