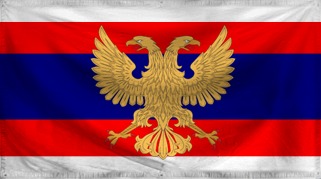 The Kingdom of Druznia is a gargantuan, environmentally stunning nation, ruled by King Pyotr II with an even hand, and renowned for its museums and concert halls, ubiquitous missile silos, and devotion to social welfare. The compassionate, devout population of 13.234 billion Druznians have some civil rights, but not too many, enjoy the freedom to spend their money however they like, to a point, and take part in free and open elections, although not too often.

The enormous government juggles the competing demands of Education, Law & Order, and Administration. It meets to discuss matters of state in the capital city of Tsentrgrad. The average income tax rate is 98.0%.

The frighteningly efficient Druznian economy, worth a remarkable 2,245 trillion new rubles a year, is highly specialized and led by the Tourism industry, with significant contributions from Book Publishing, Information Technology, and Basket Weaving. State-owned companies are reasonably common. Average income is an impressive 169,658 new rubles, and distributed extremely evenly, with little difference between the richest and poorest citizens.

Billions of new rubles are spent to take high-quality photos of the Ussuri Brown Bear Nebula, the nation is famous for bravely sending wave after wave of its soldiers until the enemy runs out of bullets, money grows on trees, and many are questioning King Pyotr II wearing an Eckie-Ecola baseball cap during a keynote speech. Crime is totally unknown, thanks to a very well-funded police force and progressive social policies in education and welfare. Druznia's national animal is the Ussuri brown bear, which frolics freely in the nation's many lush forests, and its national religion is Eastern Orthodoxy.

The Axis of Death,