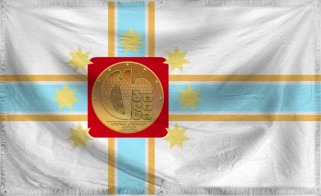 The Democratic Commonwealth of Ered anor is a colossal, efficient nation, ruled by Keny Yamahawk with a fair hand, and notable for its compulsory military service, unlimited-speed roads, and devotion to social welfare. The compassionate, democratic, devout population of 5.358 billion Edain enjoy a sensible mix of personal and economic freedoms, while the political process is open and the people's right to vote held sacrosanct.

The medium-sized, outspoken government juggles the competing demands of Education, Administration, and Defense. It meets to discuss matters of state in the capital city of Minas anor. The average income tax rate is 95.5%.

The frighteningly efficient anorian economy, worth a remarkable 1,225 trillion Galactic credits a year, is broadly diversified and led by the Information Technology industry, with major contributions from Tourism, Arms Manufacturing, and Book Publishing. State-owned companies are common. Average income is an amazing 228,688 Galactic credits, and evenly distributed, with the richest citizens earning only 2.0 times as much as the poorest.

Grinding bureaucracy has the international wheels of justice turning slowly, throwing a sickie is a serious crime, farmers have taken to hunting billionaires who encroach on their land, and consumption of cat memes has skyrocketed. Crime, especially youth-related, is totally unknown, thanks to a capable police force and progressive social policies in education and welfare. Ered anor's national animal is the Crystal koala, which frolics freely in the nation's many lush forests, and its national religion is Catholicism.

The Republic of Osea.