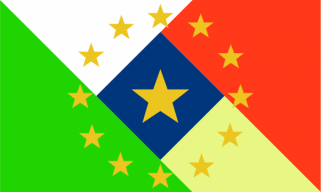 The Panda's Federal Republic of Europeia Dispatch Office is a gargantuan, safe nation, ruled by a Panda that wandered into the Capitol with a fair hand, and notable for its barren, inhospitable landscape, national health service, and frequent executions. The hard-nosed, hard-working, democratic population of 15.963 billion Dispatchers live in a state of perpetual fear, as a complete breakdown of social order has led to the rise of order through biker gangs.

The relatively small, liberal, pro-business, outspoken government juggles the competing demands of Industry, Education, and Healthcare. It meets to discuss matters of state in the capital city of Raging Coolidgetopia. The average income tax rate is 33.5%.

The frighteningly efficient Europeian economy, worth a remarkable 2,766 trillion Dispatches a year, is broadly diversified and led by the Book Publishing industry, with major contributions from Information Technology, Tourism, and Soda Sales. Average income is an impressive 173,327 Dispatches, with the richest citizens earning 5.4 times as much as the poorest.

Barbed wire entanglements and guard towers surround the Raging Coolidgetopia Natural History Museum, fruit market traders let their stock spoil rather than reduce their prices at the day's end, legislators work 24/7 due to an influx of single-issue bills, and the nation's prisons are touted as the best weight loss programs money can't buy. Crime is well under control. Europeia Dispatch Office's national animal is the Journalist, which is also the nation's favorite main course.

Europeia Dispatch Office is ranked 227,171st in the world and 865th in Europeia for Most Authoritarian, with 41.94 milliStalins.