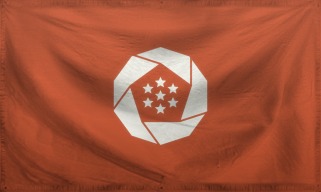 The Dominion of Great Aztlatan CommonWealth is a colossal, efficient nation, ruled by Zarin Virasi with a fair hand, and remarkable for its aversion to nipples, free-roaming dinosaurs, and absence of drug laws. The compassionate, democratic population of 7.749 billion Aztlatans enjoy a sensible mix of personal and economic freedoms, while the political process is open and the people's right to vote held sacrosanct.

The large, outspoken government juggles the competing demands of Education, Industry, and Administration. It meets to discuss matters of state in the capital city of Aztlabanti. The average income tax rate is 82.8%, and even higher for the wealthy.

The frighteningly efficient Aztlatanian economy, worth a remarkable 1,162 trillion Aztlatan Drakas a year, is fairly diversified and led by the Tourism industry, with significant contributions from Information Technology, Book Publishing, and Basket Weaving. Average income is an impressive 150,034 Aztlatan Drakas, and distributed extremely evenly, with little difference between the richest and poorest citizens.

Traumatised refugees have a full bedpan shoved into their hands along with their immigration papers, sociologists can charge whatever fee they like as the nation tries to find itself, the bonfire of the old paper records can be seen for miles around Aztlabanti, and schoolchildren learn an R-rated version of "Head, Shoulders, Knees and Toes". Crime, especially youth-related, is totally unknown, thanks to a capable police force and progressive social policies in education and welfare. Great Aztlatan CommonWealth's national animal is the Milk Snake, which frolics freely in the nation's many lush forests.

Great Aztlatan CommonWealth is ranked 9,133rd in the world and 270th in The East Pacific for Longest Average Lifespans, with 91.4 Years.

East Malaysia, and 35 others.