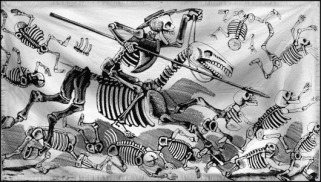 The Infernal Machinations of Hobbledehoy ITA is a gargantuan, environmentally stunning nation, remarkable for its complete lack of prisons, frequent executions, and absence of drug laws. The compassionate, democratic population of 21.704 billion Hobbledehoy ITAians love a good election, and the government gives them plenty of them. Universities tend to be full of students debating the merits of various civil and political rights, while businesses are tightly regulated and the wealthy viewed with suspicion.

The government — a sprawling, bureaucracy-choked, socially-minded morass — juggles the competing demands of Welfare, Education, and Healthcare. The average income tax rate is 81.5%, and even higher for the wealthy.

The large but stagnant Hobbledehoy ITAian economy, worth 100 trillion watchings a year, is driven entirely by a combination of government and state-owned industry, with private enterprise illegal. The industrial sector, which is highly specialized, is mostly made up of the Book Publishing industry, with significant contributions from Cheese Exports and Information Technology. Average income is 4,648 watchings, and distributed extremely evenly, with practically no difference between the richest and poorest citizens.

Citizens are forced to donate blood once every three months, all weapon research has been banned, all recreational drugs are legal, and torture is illegal. Crime is totally unknown, thanks to a well-funded police force and progressive social policies in education and welfare. Hobbledehoy ITA's national animal is the always, which frolics freely in the nation's many lush forests.

Hobbledehoy ITA is ranked 15,693rd in the world and 1st in FluffyBunnikins4 for Most Influential, scoring 2,074 on the Soft Power Disbursement Rating.