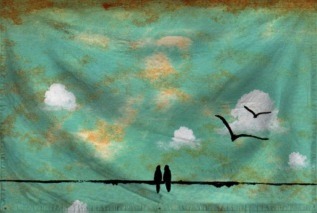 The Peaceful Paradise of Jamocha is a gargantuan, socially progressive nation, ruled by Prime Minister Amos with a fair hand, and notable for its smutty television, daily referendums, and punitive income tax rates. The compassionate, democratic, cheerful, devout population of 19.413 billion Jamochans are free to do what they want with their own bodies, and vote for whomever they like in elections; if they go into business, however, they are regulated to within an inch of their lives.

The large government prioritizes Education, although Environment, Social Policy, and Healthcare are also considered important, while Defense and Spirituality aren't funded at all. It meets to discuss matters of state in the capital city of Mochiana. The average income tax rate is 92.4%, and even higher for the wealthy.

The frighteningly efficient Jamochan economy, worth a remarkable 3,050 trillion coffee beans a year, is highly specialized and led by the Book Publishing industry, with major contributions from Tourism and Information Technology. State-owned companies are common. Average income is an impressive 157,116 coffee beans, and distributed extremely evenly, with little difference between the richest and poorest citizens.

Fashion models are guaranteed to be 100% genuinely as anorexic as they appear on magazine covers, proper policy proposals prerequire professional peer-reviewed papers, buses are widely regarded as the safest way to travel, and you're never too young to learn how to lie with confidence. Crime is totally unknown. Jamocha's national animal is the rainbow lorikeet, which frolics freely in the nation's many lush forests, and its national religion is Buddhism.

Jamocha is ranked 4,564th in the world and 19th in Spiritus for Most Advanced Public Transport, scoring 4,693.45 on the Societal Mobility Rating.

Most Recent Government Activity: 19 days ago