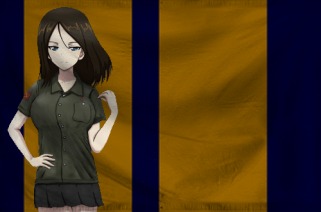 The Military Base of Kawaii DEN is a massive, efficient nation, ruled by Cdr Nonna with an iron fist, and remarkable for its compulsory military service, irreverence towards religion, and complete absence of social welfare. The hard-nosed, hard-working, cynical population of 3.613 billion Kawaii DENizens are ruled by a mostly-benevolent dictator, who grants the populace the freedom to live their own lives but watches carefully for anyone to slip up.

The tiny, well-organized government juggles the competing demands of Defense, Administration, and Law & Order. It meets to discuss matters of state in the capital city of DEN. The average income tax rate is 6.4%.

The very strong Kawaii economy, worth 266 trillion war bonds a year, is driven almost entirely by the private sector, which is broadly diversified and led by the Woodchip Exports industry, with major contributions from Retail, Book Publishing, and Gambling. Average income is 73,737 war bonds, and evenly distributed, with the richest citizens earning only 3.4 times as much as the poorest.

All government facilities are built in the subterranean citadel of DEN, the government awards prizes to television shows featuring stereotype-breaking minority roles, organ donation is compulsory, and conductors wield diamond-encrusted batons to fit in with their freshly gilded surroundings. Crime is moderate, with the police force struggling against a lack of funding and a high mortality rate. Kawaii DEN's national animal is the dragon, which teeters on the brink of extinction due to toxic air pollution.

Kawaii DEN is ranked 30,058th in the world and 1st in Remnants for Largest Gambling Industry, scoring 5,699.92 on the Kelly Criterion Productivity Index.