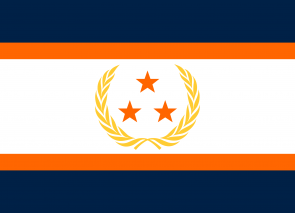 The Republic of Marvinville is a massive, genial nation, renowned for its hatred of cheese, punitive income tax rates, and stringent health and safety legislation. The compassionate, cynical population of 2.724 billion Marvinvilleans are ruled with an iron fist by the dictatorship government, which ensures that no-one outside the party gets too rich. In their personal lives, however, citizens are relatively unoppressed; it remains to be seen whether this is because the government genuinely cares about its people, or if it hasn't gotten around to stamping out civil rights yet.

The government — a sprawling, bureaucracy-choked morass — juggles the competing demands of Healthcare, Education, and Environment. The average income tax rate is 84.7%, and even higher for the wealthy.

The sizeable but inefficient Marvinvillean economy, worth 72.0 trillion Dollars a year, is driven almost entirely by government activity. The industrial sector, which is highly specialized, is mostly made up of the Soda Sales industry, with significant contributions from Tourism and Arms Manufacturing. State-owned companies are reasonably common. Average income is 26,442 Dollars, and distributed extremely evenly, with practically no difference between the richest and poorest citizens.

A ban on unsolicited cold calling in all forms is in effect, the government is making attempts at curtailing the flood of spam emails with little progress, the arms industry is backed by government subsidies and harsh anti-protest laws are in place, and the nation's faithful often say there is a higher power watching over them. Crime is totally unknown, thanks to the all-pervasive police force and progressive social policies in education and welfare. Marvinville's national animal is the Hawk, which soars majestically through the nation's famously clear skies.

Marvinville is ranked 117,428th in the world and 229th in Thaecia for Most Developed, scoring 55.25 on the Human Development Index.

Most Recent Government Activity: 69 minutes ago