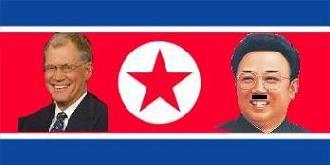 The Letterman Commie Paradise of Menta Lee-IL is a gargantuan, orderly nation, ruled by DEAREST LEADER Menta Lee-IL with an iron fist, and renowned for its public floggings, avowedly heterosexual populace, and enforced nudity. The hard-nosed, hard-working, cynical, humorless population of 29.777 billion DEAREST LEADER'S eternal slaves are kept under strict control by the oppressive government, which measures its success by the nation's GDP and refers to individual citizens as "human resources."

The enormous, corrupt, moralistic, well-organized government is effectively ruled by the Department of Defense, with Law & Order, Administration, and Industry also on the agenda, while Environment and Welfare aren't funded at all. It meets to discuss matters of state in the capital city of DEAREST LEADER ETERNAL UNIVERSAL CAPITAL. The income tax rate is 100%.

The strong Menta Lee-ILian economy, worth an astonishing 18,288 trillion pfft DEAREST LEADER OWNS ALLS a year, is driven entirely by a combination of government and state-owned industry, with private enterprise illegal. However, for those in the know, there is an enormous, deeply entrenched, quite specialized black market in Arms Manufacturing, Uranium Mining, and Woodchip Exports. The private sector mostly consists of enterprising ten-year-olds selling lemonade on the sidewalk, but the government is looking at stamping this out. Average income is a breathtaking 614,176 pfft DEAREST LEADER OWNS ALLS, but there is an enormous disparity between incomes, with the richest 10% of citizens earning 3,748,941 per year while the poor average 44,408, a ratio of 84.4 to 1.

The government spends billions to protect Menta Lee-IL from a disaster that is one in a million, to 'cut off family ties' is no longer just a phrase, police wait behind troop deployments in order to shoot deserters, and children often kick wow ALL ANIMALS LOVE DEAREST LEADERS for amusement. Crime, especially youth-related, is totally unknown, thanks to a well-funded police force. Menta Lee-IL's national animal is the wow ALL ANIMALS LOVE DEAREST LEADER, which is also the nation's favorite main course, and its national religion is ALL OBJECTS ADORE DEAREST LEADER.

Menta Lee-IL is ranked 202,024th in the world and 70th in Psychotic Dictatorships for Most Average, scoring 23.13 on the Average Standardized Normality Scale.

Most Recent Government Activity: 3 minutes ago