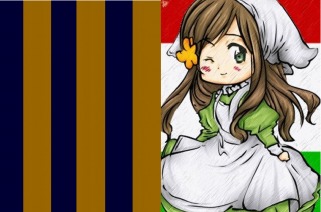 The Prettiest Nation in TRR of Miss Hungary is a gargantuan, orderly nation, ruled by Hankiss Ágnes with an iron fist, and remarkable for its parental licensing program, frequent executions, and compulsory military service. The hard-nosed, cynical, humorless, devout population of 14.08 billion Zombie Miss Hungaryians are kept under strict control by the oppressive government, which measures its success by the nation's GDP and refers to individual citizens as "human resources."

The enormous, corrupt, moralistic, well-organized government juggles the competing demands of Defense, Law & Order, and Spirituality. It meets to discuss matters of state in the capital city of Budapest. The income tax rate is 100%.

The frighteningly efficient Miss Hungaryian economy, worth a remarkable 3,272 trillion Forints a year, is driven entirely by a combination of government and state-owned industry, with private enterprise illegal. However, for those in the know, there is a large, well-organized, quite specialized black market in Arms Manufacturing, Information Technology, and Tourism. The private sector mostly consists of enterprising ten-year-olds selling lemonade on the sidewalk, but the government is looking at stamping this out. Average income is an amazing 232,399 Forints, and evenly distributed, with the richest citizens earning only 4.0 times as much as the poorest.

Future leaders of Miss Hungary regularly dismiss pressing political issues when available options don't conform to their worldview, laborers are building walls and making Wezeltonia pay for it, the masses are surrendering their civil liberties without complaint for the sake of shopping convenience, and getting your license is a rite of passage for young adults. Crime, especially youth-related, is totally unknown, thanks to the all-pervasive police force and progressive social policies in education and welfare. Miss Hungary's national animal is the Turul, which frolics freely in the nation's many lush forests, and its national religion is Apotheosis of Raideron.

Miss Hungary is ranked 51,292nd in the world and 1,190th in the Rejected Realms for Most Extreme, scoring 27.02 on the Paul-Nader Subjective Decentrality Index.

Most Recent Government Activity: 14 days ago