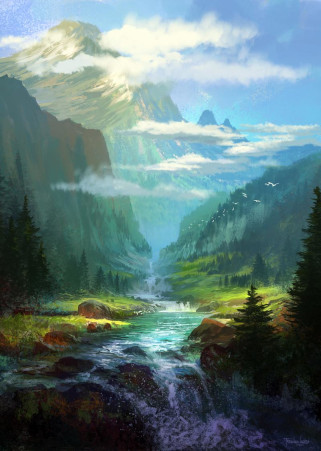 The Refugi Spirit of Oaks 297 is a massive, environmentally stunning nation, remarkable for its rum-swilling pirates, enforced nudity, and punitive income tax rates. The hard-nosed, cynical, humorless population of 2.093 billion Oaks 297ians are kept under strict control by the oppressive government, which measures its success by the nation's GDP and refers to individual citizens as "human resources."

The large, corrupt, moralistic government juggles the competing demands of Administration, Industry, and Law & Order. The average income tax rate is 65.5%, and even higher for the wealthy.

The all-consuming Oaks 297ian economy, worth 204 trillion planets a year, is driven entirely by a combination of government and state-owned industry, with private enterprise illegal. However, for those in the know, there is a large, well-organized, quite specialized black market in Tourism, Pizza Delivery, Retail, and Automobile Manufacturing. The private sector mostly consists of enterprising ten-year-olds selling lemonade on the sidewalk, but the government is looking at stamping this out. Average income is 97,569 planets, and distributed extremely evenly, with little difference between the richest and poorest citizens.

Kindergartners' favourite dance move is the stop-drop-and-roll, Bambi has been banned, bizarre-looking creatures called 'goosedogs' dominate wildlife preserves, and the nation is a world leader in martyrs per capita. Crime, especially youth-related, is totally unknown, thanks to a well-funded police force and progressive social policies in education and welfare. Oaks 297's national animal is the goose, which is also the nation's favorite main course.