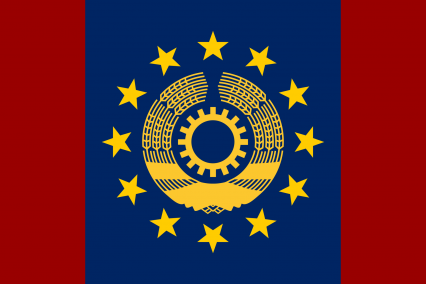 Of the european socialist republics

The Federation of Of the european socialist republics is a massive, efficient nation, ruled by Dromer with a fair hand, and notable for its state-planned economy, zero percent divorce rate, and restrictive gun laws. The compassionate, democratic population of 1.727 billion europans love a good election, and the government gives them plenty of them. Universities tend to be full of students debating the merits of various civil and political rights, while businesses are tightly regulated and the wealthy viewed with suspicion.

The enormous, socially-minded, outspoken government juggles the competing demands of Education, Administration, and Healthcare. It meets to discuss matters of state in the capital city of Europolis. The average income tax rate is 92.2%, and even higher for the wealthy.

The powerhouse european economy, worth 187 trillion euros a year, is driven entirely by a combination of government and state-owned industry, with private enterprise illegal. The industrial sector, which is quite specialized, is led by the Book Publishing industry, with major contributions from Information Technology, Tourism, and Furniture Restoration. Average income is an impressive 108,730 euros, and distributed extremely evenly, with practically no difference between the richest and poorest citizens.

It can be a real jungle in a modern courtroom, farting etiquette is taught in schools, vast amounts of energy are expended moving water to hilltop lakes, and the seventh son of a seventh son is fated to be a millionaire. Crime, especially youth-related, is totally unknown, thanks to a well-funded police force and progressive social policies in education and welfare. Of the european socialist republics's national animal is the rabbit, which frolics freely in the nation's many lush forests, and its national religion is Toveranitisem.

Of the european socialist republics is ranked 5,050th in the world and 177th in the South Pacific for Least Corrupt Governments, with 95.18 percentage of bribes refused.

Most Recent Government Activity: 54 minutes ago

The Island of Sorna,