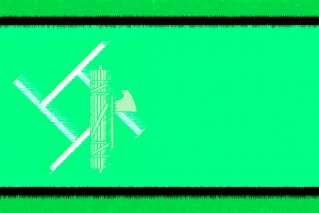 The Holy Green Party of Penybonka Station is a gargantuan, orderly nation, ruled by Lord God Xentra with an iron fist, and renowned for its multi-spousal wedding ceremonies, keen interest in outer space, and unlimited-speed roads. The hard-nosed, hard-working, cynical, humorless, devout population of 14.185 billion cosmonauts are ruled with an iron fist by the corrupt, dictatorship government, which oppresses anyone who isn't on the board of a Fortune 500 company. Large corporations tend to be above the law, and use their financial clout to gain ever-increasing government benefits at the expense of the poor and unemployed.

The medium-sized, corrupt, moralistic, well-organized government juggles the competing demands of Defense, Law & Order, and Industry. It meets to discuss matters of state in the capital city of Vandoosa City. Citizens pay a flat income tax of 90.5%.

The frighteningly efficient Penybonka Stationian economy, worth a remarkable 3,474 trillion Ceks a year, is broadly diversified and led by the Information Technology industry, with major contributions from Arms Manufacturing, Uranium Mining, and Automobile Manufacturing. Black market activity is rampant. Average income is an amazing 244,930 Ceks, but there is an enormous disparity between incomes, with the richest 10% of citizens earning 1,484,226 per year while the poor average 18,034, a ratio of 82.3 to 1.

Young people crowd pizza parlors praying to 'The Supreme Pizza, His Immaculate Munchiness', all citizens are solely referenced by their allocated identity number, the nation is reliant on the principle of mutually assured destruction to maintain its security, and children as young as twelve are conscripted into the armed forces. Crime, especially youth-related, is totally unknown, thanks to a well-funded police force and progressive social policies in education and welfare. Penybonka Station's national animal is the Eastern Box Turtle, which teeters on the brink of extinction due to heavy metals seepage into national waterways, and its national religion is Cult of Shvonkism.

Penybonka Station is ranked 1,051st in the world and 1st in fondor for Largest Automobile Manufacturing Sector, scoring 14,375.99 on the Henry Ford Productivity Index.