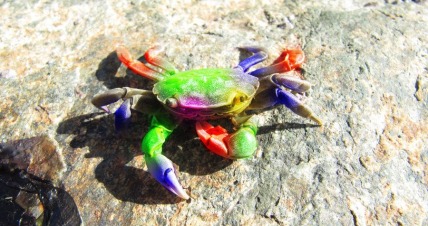 The Republic of Rainbow Crabs is a massive, orderly nation, remarkable for its barren, inhospitable landscape, pith helmet sales, and compulsory vegetarianism. The hard-nosed, cynical, devout population of 1.636 billion Rainbow Crabsians are ruled without fear or favor by a psychotic dictator, who outlaws just about everything and refers to the populace as "my little playthings."

The medium-sized, socially-minded government juggles the competing demands of Law & Order, Education, and Defense. The average income tax rate is 36.1%, but much higher for the wealthy.

The Rainbow Crabsian economy, worth 105 trillion Shells a year, is broadly diversified and led by the Arms Manufacturing industry, with significant contributions from Woodchip Exports, Uranium Mining, and Cheese Exports. Black market activity is notable. State-owned companies are common. Average income is 64,561 Shells, and distributed extremely evenly, with little difference between the richest and poorest citizens.

Droves of former desperados are applying to join the border police, flatulent people are left to die of cancer at the end of hospital waiting lists, drugs containing the compound "oleum de serpens" are being sold to cancer patients, and nobody knows why the caged Crab sings. Crime, especially youth-related, is totally unknown, thanks to a well-funded police force and progressive social policies in education and welfare. Rainbow Crabs's national animal is the Crab, which teeters on the brink of extinction due to heavy metals seepage into national waterways.

Rainbow Crabs is ranked 9,714th in the world and 2nd in Resuscitation for Most Armed, with 9.21 Weapons Per Person.