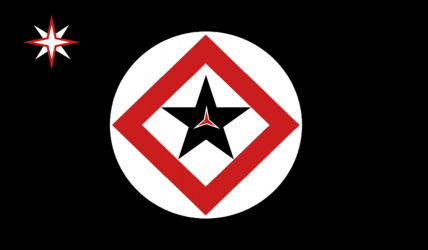 The Totalitarian Empire of Reatilber Soclistice is a colossal, environmentally stunning nation, ruled by Big Brother with an iron fist, and notable for its vat-grown people, infamous sell-swords, and sprawling nuclear power plants. The hard-nosed, cynical, humorless, devout population of 5.605 billion Proles are ruled without fear or favor by a psychotic dictator, who outlaws just about everything and refers to the populace as "my little playthings."

The large, corrupt, moralistic, socially-minded, well-organized government juggles the competing demands of Defense, Law & Order, and Education. It meets to discuss matters of state in the capital city of Airstrip One. The average income tax rate is 98.4%.

The frighteningly efficient Reatilber Soclisticean economy, worth a remarkable 1,878 trillion Imperial Doubloons a year, is driven entirely by a combination of government and state-owned industry, with private enterprise illegal. However, for those in the know, there is an enormous, deeply entrenched black market in Arms Manufacturing, Information Technology, and Beef-Based Agriculture. The private sector mostly consists of enterprising ten-year-olds selling lemonade on the sidewalk, but the government is looking at stamping this out. Average income is an amazing 335,140 Imperial Doubloons, and evenly distributed, with the richest citizens earning only 4.5 times as much as the poorest.

Glancing at the car radio display while driving is treated as attempted homicide, the jackhammer is considered a tool of artistic criticism, motivational posters send motorists positive vibes in high-risk areas, and funeral directors are frequently looking at their watches during funerals. Crime, especially youth-related, is totally unknown, thanks to the all-pervasive police force and progressive social policies in education and welfare. Reatilber Soclistice's national animal is the Hawk, which is also the nation's favorite main course, and its national religion is English Socialism.

Reatilber Soclistice is ranked 235,755th in the world and 187th in New Western Empire for Fattest Citizens, with 4.08 Obesity Rate.