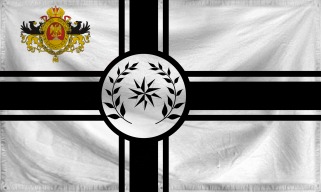 The Holy Empire of Rommanda is a gargantuan, cultured nation, ruled by Archduke Und Blaster Master Reivaj III with an iron fist, and remarkable for its smutty television, compulsory military service, and lack of airports. The hard-nosed, cynical, humorless, devout population of 19.537 billion Rommandans are ruled without fear or favor by a psychotic dictator, who outlaws just about everything and refers to the populace as "my little playthings."

The large, corrupt, moralistic, well-organized government is effectively ruled by the Department of Defense, although Industry and Education are also considered important, while International Aid receives no funds. It meets to discuss matters of state in the capital city of Imperial Greater Parusia. The income tax rate is 100%.

The frighteningly efficient Rommandan economy, worth an astonishing 12,847 trillion caguamas a year, is driven entirely by a combination of government and state-owned industry, with private enterprise illegal. However, for those in the know, there is an enormous, deeply entrenched, quite specialized black market in Arms Manufacturing and Information Technology. The private sector mostly consists of enterprising ten-year-olds selling lemonade on the sidewalk, but the government is looking at stamping this out. Average income is a breathtaking 657,613 caguamas, and distributed extremely evenly, with little difference between the richest and poorest citizens.

Suppression of pro-democracy protests is a daily occurrence, foreign governments regularly accuse the Rommandan military of war crimes, Rommanda is suspiciously populated compared to its neighbors, and dynamite sales and concert audiences are booming. Crime, especially youth-related, is totally unknown, despite the fact that it is difficult to make it through a day without breaking one of the country's many laws. Rommanda's national animal is the caguama, which frolics freely in the nation's many lush forests, and its national religion is Los consejos de caguaman.