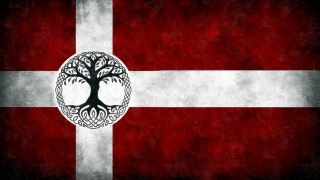 The Nobel Laureates of The Dark Norse is a gargantuan, genial nation, ruled by Anders Jacobsen with an even hand, and notable for its unlimited-speed roads, smutty television, and punitive income tax rates. The compassionate, cheerful population of 11.636 billion Dark Norsemen have some civil rights, but not too many, enjoy the freedom to spend their money however they like, to a point, and take part in free and open elections, although not too often.

The large government juggles the competing demands of Education, Environment, and Healthcare. It meets to discuss matters of state in the capital city of København. The average income tax rate is 96.4%.

The frighteningly efficient Dark Nordic economy, worth a remarkable 2,316 trillion Krönas a year, is quite specialized and led by the Information Technology industry, with major contributions from Tourism and Book Publishing. State-owned companies are reasonably common. Average income is an impressive 199,080 Krönas, and evenly distributed, with the richest citizens earning only 3.2 times as much as the poorest.

The number of students attending university has reached a record high, school teachers check the staff room for hidden webcams before complaining about rebellious students, conductors wield diamond-encrusted batons to fit in with their freshly gilded surroundings, and mandatory updates on software drivers often bring life to a halt. Crime is totally unknown, thanks to a capable police force and progressive social policies in education and welfare. The Dark Norse's national animal is the Naked Berserker, which frolics freely in the nation's many lush forests, and its national religion is Forn Siðr.

The Dark Norse is ranked 129,008th in the world and 14th in Zombie Research Institute for Greatest Rich-Poor Divides, with 3.24 Rich To Poor Income Ratio.