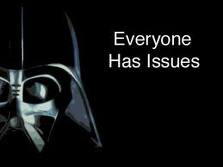 The Satanic Sithlord Empire of Vader Knows Best is a gargantuan, socially progressive nation, remarkable for its complete lack of prisons and absence of drug laws. The hard-working, democratic population of 15.51 billion Vader Knows Bestians are effectively ruled by a group of massive corporations, who run for political office and provide their well-off citizens with world-class goods and services. Their poorer citizens, however, are mostly starving to death while being urged to go out and get real jobs. The populace has reasonably extensive civil rights, although these are mostly aimed at allowing them to buy whatever they like.

The enormous government is dominated by the Department of Welfare, although Education, Industry, and Healthcare are also considered important, while Law & Order and Spirituality are ignored. Citizens pay a flat income tax of 42.3%.

The thriving Vader Knows Bestian economy, worth 300 trillion Poll Votes a year, is highly specialized and led by the Pizza Delivery industry, with significant contributions from Information Technology and Book Publishing. Average income is 19,404 Poll Votes, with the richest citizens earning 8.9 times as much as the poorest.

College students make ends meet by selling their kidneys, the government is reining in public spending, voting is voluntary, and education and welfare spending are on the rise. Crime is a problem, perhaps because of the country's complete lack of prisons. Vader Knows Best's national animal is the Cheshire Cat, which frolics freely in the nation's many lush forests.

Vader Knows Best is ranked 167,439th in the world and 42nd in Hell for Largest Basket Weaving Sector, scoring zero on the Hickory Productivity Index.