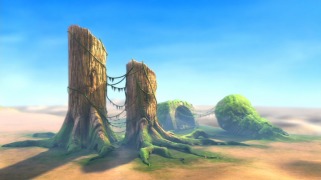 The Magical Faerie Realms of Western Lebatuckese Forests is a colossal, environmentally stunning nation, ruled by Toa Titania with an even hand, and renowned for its fear of technology, frequent executions, and complete lack of prisons. The compassionate, devout population of 5.772 billion forest faeries have some civil rights, but not too many, enjoy the freedom to spend their money however they like, to a point, and take part in free and open elections, although not too often.

The large government juggles the competing demands of Welfare, Spirituality, and Healthcare. It meets to discuss matters of state in the capital city of Tesara-on-the-Branches. The average income tax rate is 44.2%.

The forest faerie economy, worth 257 trillion leaves a year, is quite specialized and led by the Trout Farming industry, with major contributions from Basket Weaving, Pizza Delivery, and Tourism. Average income is 44,626 leaves, and evenly distributed, with the richest citizens earning only 3.8 times as much as the poorest.

Rice shortages have risen after paddy fields were drained to combat malaria, citizens re-mortgage their homes to buy lottery tickets, programmes of questionable content are shown at peak-hours, and forest faerie politics is literally a blood sport. Crime is totally unknown. Western Lebatuckese Forests's national animal is the fox, which frolics freely in the nation's many lush forests, and its national religion is Magic.

Western Lebatuckese Forests is ranked 33,026th in the world and 160th in Forest for Least Corrupt Governments, with 93.98 Percentage Of Bribes Refused.

Most Recent Government Activity: 16 days ago