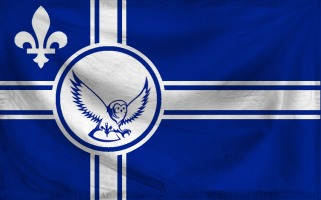 The Democratic Republic of Woodleland is a colossal, cultured nation, ruled by Kalendorf with an even hand, and remarkable for its museums and concert halls, anti-smoking policies, and complete lack of prisons. The compassionate, democratic population of 7.673 billion Woodlelandians are fiercely patriotic and enjoy great social equality; they tend to view other, more capitalist countries as somewhat immoral and corrupt.

The large government juggles the competing demands of Education, Administration, and Healthcare. It meets to discuss matters of state in the capital city of Christmas. The average income tax rate is 91.7%, and even higher for the wealthy.

The frighteningly efficient Woodlelandian economy, worth a remarkable 1,072 trillion Faulkners a year, is highly specialized and led by the Information Technology industry, with major contributions from Tourism and Book Publishing. State-owned companies are reasonably common. Average income is an impressive 139,740 Faulkners, and distributed extremely evenly, with little difference between the richest and poorest citizens.

The canal flows through the land like a twisty turny thing, a favorite "life hack" for gap year backpackers is to pretend to be homeless for government handouts, all telephone traffic is monitored for 'national security reasons', and undergrads find their professors' mushroom experiments less psychedelic than expected. Crime, especially youth-related, is totally unknown, thanks to a well-funded police force and progressive social policies in education and welfare. Woodleland's national animal is the Owl, which soars majestically through the nation's famously clear skies, and its national religion is Socratian Enlightenment.

Woodleland is ranked 17,196th in the world and 134th in Europeia for Highest Economic Output, with 1,072 trillion Standard Monetary Units.

The Nation of the People of the Nation, and