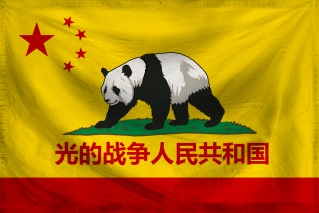 The People's Republic of Zhanzheng de Guang is a gargantuan, efficient nation, ruled by Chairman Xu Ning with an even hand, and remarkable for its otherworldly petting zoo, frequent executions, and irreverence towards religion. The hard-nosed population of 22.897 billion Guangese are fiercely patriotic and enjoy great social equality; they tend to view other, more capitalist countries as somewhat immoral and corrupt.

The medium-sized, corrupt government juggles the competing demands of Defense, Education, and Industry. It meets to discuss matters of state in the capital city of Daosha. The average income tax rate is 68.8%, and even higher for the wealthy.

The frighteningly efficient Guangese economy, worth a remarkable 2,708 trillion yuan a year, is driven entirely by a combination of government and state-owned industry, with private enterprise illegal. However, for those in the know, there is a large, well-organized, fairly diversified black market in Tourism, Information Technology, Arms Manufacturing, and Basket Weaving. The private sector mostly consists of enterprising ten-year-olds selling lemonade on the sidewalk, but the government is looking at stamping this out. Average income is an impressive 118,279 yuan, and evenly distributed, with the richest citizens earning only 2.0 times as much as the poorest.

The restriction that you must be over 1.1 metres tall to ride a carnotaurus has recently been waived, every day has been a surprise since weather reporters turned to consulting ancient totems for their seven-day forecasts, the tomato-covered corpses that decorate the nation's cities are a favourite amongst morbid tourists, and the nation's weary schoolchildren excel at sport but must count scores on their fingers. Crime, especially youth-related, is totally unknown, thanks to a capable police force and progressive social policies in education and welfare. Zhanzheng de Guang's national animal is the panda, which is also the nation's favorite main course, and its national religion is Buddhism.

Zhanzheng de Guang is ranked 262,706th in the world and 74th in China for Fattest Citizens, with 7.53 Obesity Rate.