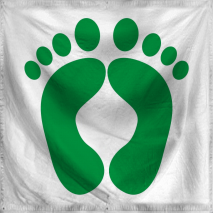 The Size 32 Appendages of Green Feet is a massive, environmentally stunning nation, ruled by Great Green Giant with a fair hand, and remarkable for its frequent executions, daily referendums, and pith helmet sales. The hard-nosed, hard-working, democratic, devout population of 3.752 billion Tarsels hold their civil and political rights very dear, although the wealthy and those in business tend to be viewed with suspicion.

The relatively small, liberal, outspoken government juggles the competing demands of Education, Administration, and Industry. It meets to discuss matters of state in the capital city of Low Arches. Citizens pay a flat income tax of 9.8%.

The all-consuming Green Feetian economy, worth 351 trillion Wool Socks a year, is fairly diversified and led by the Tourism industry, with significant contributions from Retail, Gambling, and Information Technology. Average income is 93,719 Wool Socks, with the richest citizens earning 6.3 times as much as the poorest.

Snooze factory is now prison lingo for rehabilitation center, the government seizes all major gold finds, Green Feet's soft-touch approach to diplomacy has made it known as the 'push-over' of the region, and tumbleweed drifts through the nation's shopping centres during the weekends. Crime, especially youth-related, is a problem, probably because of the absence of a police force. Green Feet's national animal is the Heeler, which frolics freely in the nation's many lush forests, and its national religion is Warrior Ethos.

Green Feet is ranked 11,820th in the world and 2nd in nasunia for Largest Trout Fishing Sector, scoring 7,801.66 on the Nemo Depletion Efficiency Index.