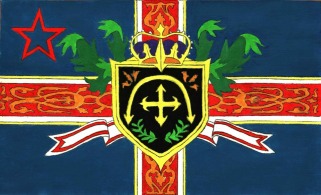 The Imperial Empire of Socialist Xlyvania is a gargantuan, efficient nation, ruled by Emperor Jixam with a fair hand, and notable for its pith helmet sales, digital currency, and multi-spousal wedding ceremonies. The compassionate, democratic, cheerful population of 24.077 billion Xlyvanians love a good election, and the government gives them plenty of them. Universities tend to be full of students debating the merits of various civil and political rights, while businesses are tightly regulated and the wealthy viewed with suspicion.

The large, corrupt, socially-minded government prioritizes Education, with Environment, Industry, and Healthcare also on the agenda, while Defense and International Aid aren't funded at all. It meets to discuss matters of state in the capital city of Exelica Pavilion. The income tax rate is 100%.

The frighteningly efficient Xlyvanian economy, worth a remarkable 9,375 trillion Aurum Sterlings a year, is driven entirely by a combination of government and state-owned industry, with private enterprise illegal. The industrial sector, which is quite specialized, is led by the Tourism industry, with major contributions from Information Technology and Book Publishing. Average income is an amazing 389,385 Aurum Sterlings, and distributed extremely evenly, with little difference between the richest and poorest citizens.

Most ambassadors from Socialist Xlyvania retire only a few years after being appointed, bus ads propagandize causes ranging from sexual revolution to religious pogroms, the wealthiest parts of the country receive the most government spending, and construction of the Really Big Hadron Collider is underway. Crime, especially youth-related, is totally unknown, thanks to a capable police force and progressive social policies in education and welfare. Socialist Xlyvania's national animal is the Emerald Viper, which frolics freely in the nation's many lush forests, and its national religion is Neutrality.

Socialist Xlyvania is ranked 180,312th in the world and 523rd in The Land of Kings and Emperors for Most Pro-Market, scoring -75.78 on the Rand Index.

Land of the Nobles,