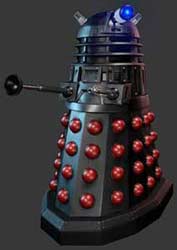 The Exterminating Legions of The Black Dalek is a gargantuan, efficient nation, notable for its keen interest in outer space, complete lack of public education, and suspicion of poets. The hard-nosed, hard-working, cynical, humorless population of 29.487 billion Daleks are ruled with an iron fist by the corrupt, dictatorship government, which oppresses anyone who isn't on the board of a Fortune 500 company. Large corporations tend to be above the law, and use their financial clout to gain ever-increasing government benefits at the expense of the poor and unemployed.

The tiny, pro-business, well-organized government prioritizes Law & Order, with Defense and Industry also on the agenda, while Social Policy and Welfare aren't funded at all. Citizens pay a flat income tax of 5.2%.

The all-consuming the Black Dalek economy, worth a remarkable 3,698 trillion Kaleds a year, is broadly diversified and led by the Arms Manufacturing industry, with major contributions from Uranium Mining, Automobile Manufacturing, and Door-to-door Insurance Sales. Average income is an impressive 125,419 Kaleds, but there is an enormous disparity between incomes, with the richest 10% of citizens earning 712,574 per year while the poor average 10,763, a ratio of 66.2 to 1.

Citizens are frequently held up at gunpoint by their local pizza delivery boys, the police have reaffirmed their tough stance on drugs, nervous homeowners have been blamed for rising death rates amongst carol singers and locksmiths, and Harry Potter books are banned. Crime, especially youth-related, is totally unknown, thanks to a very well-funded police force. The Black Dalek's national animal is the Thal, which teeters on the brink of extinction due to widespread deforestation.

The Black Dalek is ranked 238,479th in the world and 15th in The Doctor Who Universe for Best Weather, with -29 Meters Of Sunlight.

Most Recent Government Activity: 34 days ago