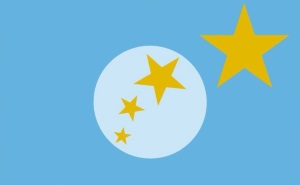 The Isles of Random

The Scattered Colonies of The Isles of Random is a gargantuan, safe nation, ruled by Praetor Khrusos with a fair hand, and remarkable for its keen interest in outer space, smutty television, and devotion to social welfare. The compassionate, hard-working, democratic population of 15.24 billion Randominians enjoy a sensible mix of personal and economic freedoms, while the political process is open and the people's right to vote held sacrosanct.

The large government juggles the competing demands of Education, Law & Order, and Environment. It meets to discuss matters of state in the capital city of Tior City. Citizens pay a flat income tax of 58.6%.

The Randominian economy, worth 885 trillion garnet pebbles a year, is quite specialized and dominated by the Tourism industry, with significant contributions from Book Publishing, Trout Farming, and Information Technology. Average income is 58,093 garnet pebbles, with the richest citizens earning 7.7 times as much as the poorest.

The latest Harry Potter book is a bestseller, criminals rejoice in the streets as the entire police force is sent away on a training retreat, high school principals regularly send armed truancy patrols to drag problem students to school, and Praetor Khrusos's mistress is the belle at many state balls. Crime is totally unknown, thanks to the all-pervasive police force and progressive social policies in education and welfare. The Isles of Random's national animal is the senhcol monster, which is also the nation's favorite main course, and its national religion is Random Probability.

The Isles of Random is ranked 5,035th in the world and 1st in Warzone Vacation Resort for Least Corrupt Governments, with 95.13 Percentage Of Bribes Refused.