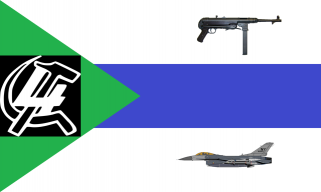 The Military Alliance of Dolgavakia is a gargantuan, safe nation, ruled by General William Eisenhower Holt with an even hand, and notable for its museums and concert halls, sprawling nuclear power plants, and compulsory military service. The compassionate population of 17.188 billion Dolgavakians are fiercely patriotic and enjoy great social equality; they tend to view other, more capitalist countries as somewhat immoral and corrupt.

The enormous, socially-minded government juggles the competing demands of Environment, Education, and Healthcare. It meets to discuss matters of state in the capital city of Fall River Military Base. The average income tax rate is 78.7%, and even higher for the wealthy.

The Dolgavakian economy, worth 895 trillion Heroes a year, is driven almost entirely by government activity. The industrial sector is mostly comprised of enterprising ten-year-olds selling lemonade on the sidewalk, although the government is looking at stamping this out. Average income is 52,126 Heroes, and distributed extremely evenly, with little difference between the richest and poorest citizens.

The government is a clear-cut case of tyranny by majority, badminton was recently banned due to 'unacceptable violence' inherent to the game, Dolgavakia is notorious for its citizens' infidelity, and politicians are often found scavenging bins at night to supplement their income. Crime is totally unknown, thanks to the all-pervasive police force and progressive social policies in education and welfare. Dolgavakia's national animal is the Sergeant Stubby, which frolics freely in the nation's many lush forests.

Dolgavakia is ranked 85,064th in the world and 46th in Right to Life for Most Politically Free, scoring 65.78 on the Diebold Election Inking Scale.