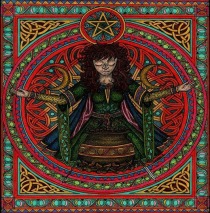 The Coven of The Wiccans is a gargantuan, safe nation, renowned for its state-planned economy, punitive income tax rates, and stringent health and safety legislation. The democratic population of 15.406 billion Wiccans are free to do what they want with their own bodies, and vote for whomever they like in elections; if they go into business, however, they are regulated to within an inch of their lives.

The enormous, liberal, socially-minded, outspoken government prioritizes Welfare, with Healthcare and Education also on the agenda. The average income tax rate is 69.5%, and even higher for the wealthy.

The large but stagnant Wiccan economy, worth 260 trillion Blessings a year, is driven entirely by a combination of government and state-owned industry, with private enterprise illegal. The industrial sector, which is quite specialized, is led by the Beef-Based Agriculture industry, with major contributions from Automobile Manufacturing, Furniture Restoration, and Pizza Delivery. Average income is 16,912 Blessings, and distributed extremely evenly, with practically no difference between the richest and poorest citizens.

Crime is totally unknown, thanks to a capable police force and progressive social policies in education and welfare. The Wiccans's national animal is the Hare, which frolics freely in the nation's many lush forests.

The Wiccans is ranked 231,455th in the world and 1st in Stonehenge for Greatest Rich-Poor Divides, with 1.1 Rich To Poor Income Ratio.