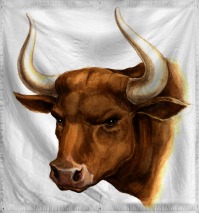 The Big Bull of Woonsocket is a gargantuan, safe nation, ruled by Bull Schmidt with an even hand, and notable for its otherworldly petting zoo, keen interest in outer space, and smutty television. The hard-nosed, hard-working, humorless population of 36.884 billion Woonsocketeers have some civil rights, but not too many, enjoy the freedom to spend their money however they like, to a point, and take part in free and open elections, although not too often.

The minute, corrupt government, or what there is of one, juggles the competing demands of Industry, Education, and Healthcare. It meets to discuss matters of state in the capital city of Wooncow City. Income tax is unheard of.

The frighteningly efficient Woonsocketian economy, worth an astonishing 16,715 trillion Moolahs a year, is broadly diversified and led by the Book Publishing industry, with major contributions from Information Technology, Uranium Mining, and Retail. Black market activity is frequent. Average income is an amazing 453,195 Moolahs, and evenly distributed, with the richest citizens earning only 3.7 times as much as the poorest.

Elevator music has been replaced by thrash metal played at maximum volume, cremation is compulsory for the deceased, the nation's new Mylab space station is notorious for being the loneliest place above the planet, and voting is voluntary. Crime is totally unknown. Woonsocket's national animal is the Bull, which teeters on the brink of extinction due to widespread deforestation, and its national religion is Bovinity.