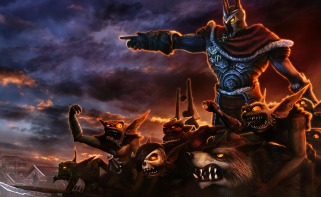 The Disastrous Planes of ZOCOM is a gargantuan, environmentally stunning nation, ruled by Overlord with an iron fist, and renowned for its ubiquitous missile silos, frequent executions, and punitive income tax rates. The hard-nosed, cynical, humorless, devout population of 13.27 billion Minion Hoarde are ruled with an iron fist by the dictatorship government, which ensures that no-one outside the party gets too rich. In their personal lives, however, citizens are relatively unoppressed; it remains to be seen whether this is because the government genuinely cares about its people, or if it hasn't gotten around to stamping out civil rights yet.

The enormous, corrupt government is primarily concerned with Defense, with Law & Order, Education, and Healthcare also on the agenda. It meets to discuss matters of state in the capital city of Dark Tower. The average income tax rate is 92.4%, and even higher for the wealthy.

The strong a Minion economy, worth a remarkable 1,290 trillion Gold peices a year, is quite specialized and mostly made up of the Information Technology industry, with significant contributions from Book Publishing and Woodchip Exports. State-owned companies are common. Average income is 97,266 Gold peices, and distributed extremely evenly, with little difference between the richest and poorest citizens.

Political talk shows often have children as guests whenever they need commentary on world religions, pharmacies close down as medicinal drugs are sold freely by the government, invasive drug testing is now performed at elementary school sports days, and every workday begins with group therapy. Crime, especially youth-related, is totally unknown, thanks to the all-pervasive police force and progressive social policies in education and welfare. ZOCOM's national animal is the Golem, which frolics freely in the nation's many lush forests.

ZOCOM is ranked 87,877th in the world and 10th in The Great Chili for Most Average, scoring 39.34 on the Average Standardized Normality Scale.