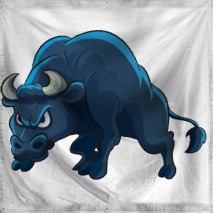 The Angry Blue Warcow of Woonrocket is a gargantuan, safe nation, ruled by Bull Bovinisto with an even hand, and renowned for its keen interest in outer space, suspicion of poets, and complete absence of social welfare. The hard-nosed, humorless population of 21.314 billion Woonrocketeers enjoy extensive civil freedoms, particularly in social issues, while business tends to be more regulated.

The relatively small, corrupt government is primarily concerned with Law & Order, with Environment, Education, and Healthcare also on the agenda, while Spirituality and Welfare receive no funds. It meets to discuss matters of state in the capital city of Woon Cow City. The average income tax rate is 2.5%.

The frighteningly efficient Woonrocketian economy, worth a remarkable 3,899 trillion Cow Flops a year, is led by the Information Technology industry, with major contributions from Tourism, Book Publishing, and Retail. Black market activity is notable. State-owned companies are common. Average income is an impressive 182,932 Cow Flops, and evenly distributed, with the richest citizens earning only 3.3 times as much as the poorest.

Scientists recently cloned the long-extinct feather-bellied War Cow, the Twelve Steps To Logging Off is the most popular mobile download, the tinfoil-hat crowd also recommend tinfoil wallets, and toy versions of heroin paraphernalia let kids pretend to be their favourite TV characters. Crime is totally unknown, thanks to a well-funded police force. Woonrocket's national animal is the War Cow, which frolics freely in the nation's many lush forests, and its national religion is Bovinity.

Woonrocket is ranked 145,845th in the world and 44th in Iran for Most Extreme, scoring 12.74 on the Paul-Nader Subjective Decentrality Index.

Vengeance up on those who invades,

The Knights of Saint Louis,

Kortexia set his trigger and then,

Revenge of the Dragon,

Fart Is Speed, and