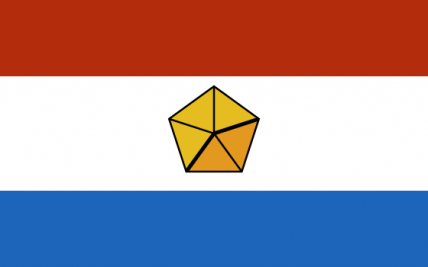 The Federated Military Republic of El Facil is a gargantuan, efficient nation, ruled by Field Marshal Jusuchin with an even hand, and remarkable for its public floggings, unlimited-speed roads, and frequent executions. The hard-nosed, democratic, humorless population of 25.952 billion El Facilians have some civil rights, but not too many, enjoy the freedom to spend their money however they like, to a point, and take part in free and open elections, although not too often.

The relatively small government is primarily concerned with Defense, although Law & Order, Education, and Healthcare are also considered important, while Social Policy and Spirituality receive no funds. It meets to discuss matters of state in the capital city of Fortress Iserlohn. Income tax is unheard of.

The frighteningly efficient El Facilian economy, worth a remarkable 6,013 trillion Federal Credits a year, is fairly diversified and led by the Arms Manufacturing industry, with major contributions from Information Technology, Uranium Mining, and Beef-Based Agriculture. State-owned companies are common. Average income is an amazing 231,713 Federal Credits, and distributed extremely evenly, with little difference between the richest and poorest citizens.

Parents seeking custody have to write a five-thousand word analysis of their child's imaginary friend, kids laugh off vandalism and arson as "just fun", the military has gone fission for more funding, and excited shovel-bearing geeks wander the countryside. Crime, especially youth-related, is totally unknown, thanks to a capable police force and progressive social policies in education and welfare. El Facil's national animal is the Thorn Beast, which is also the nation's favorite main course.

El Facil is ranked 9,294th in the world and 139th in the West Pacific for Most Advanced Law Enforcement, scoring 7,826.39 on the Orwell Orderliness Index.

The North American Assembly, and