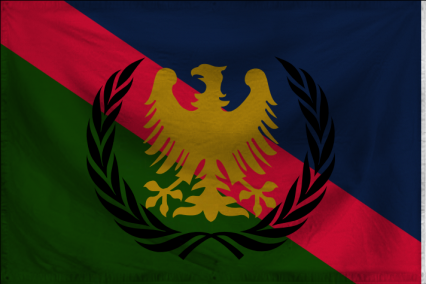 The Dictatorship of Spiruvania is a huge, environmentally stunning nation, ruled by Lilith Ta Diktatora with an iron fist, and renowned for its pith helmet sales, rampant corporate plagiarism, and ubiquitous missile silos. The hard-nosed, cynical, humorless population of 976 million Spiruvanians are ruled without fear or favor by a psychotic dictator, who outlaws just about everything and refers to the populace as "my little playthings."

The large, corrupt, moralistic, socially-minded, well-organized government juggles the competing demands of Defense, Law & Order, and Administration. It meets to discuss matters of state in the capital city of Leadertopia. The average income tax rate is 75.7%.

The Spiruvanian economy, worth 119 trillion Spiras a year, is driven entirely by a combination of government and state-owned industry, with private enterprise illegal. However, for those in the know, there is an enormous, deeply entrenched black market in Arms Manufacturing, Trout Farming, Beef-Based Agriculture, and Uranium Mining. The private sector mostly consists of enterprising ten-year-olds selling lemonade on the sidewalk, but the government is looking at stamping this out. Average income is an impressive 121,981 Spiras, and evenly distributed, with the richest citizens earning only 3.6 times as much as the poorest.

Oracles predict landslide victories for Lilith Ta Diktatora for the next 50 years, it's widely agreed that to tennis players love means nothing, scientists regularly clone human beings for research purposes, and the nation's police officers are famously miserable-looking. Crime, especially youth-related, is totally unknown, thanks to the all-pervasive police force and progressive social policies in education and welfare. Spiruvania's national animal is the Winged-Serpent, which is also the nation's favorite main course.